Moon photography, especially against a well-known local landmark, seems to be all the rage these days.  And no wonder, such shots can be dramatic and beautiful.

On Wednesday, December 21, a group of local landscape photographers got up early in the morning to shoot the crescent moon above Angel’s Gate Lighthouse (aka Los Angeles Harbor Lighthouse on Google Maps) in Long Beach, CA.  I’ve shot here before, but moonrise was about 5am, and it was my first time here shooting in complete darkness.  As most photographers know, the technical challenges can vary greatly depending on time and light.

Focus.  The first challenge was focus.  There is a beacon on the lighthouse, but it only lights up for a couple seconds every 15 seconds or so.  So you have to manually focus during those few seconds the lighthouse beacon is on.

Aperture and ISO.  I was using a Sigma 150-600mm, so the aperture was at least f/5.6.  Someone had told me that you should keep the shutter speed under 1 second, which seemed to make sense because the moon would likely blur with longer shutter speeds.  So I was basically taking stabs in the dark to figure out the right setting.

5:04am.  Here’s one of my early tries at 504am.  According to PlanitPro, the moon was already at the horizon by this time.  In this shot, the green dot is the light from the lighthouse beacon.  You can see how dark it was. 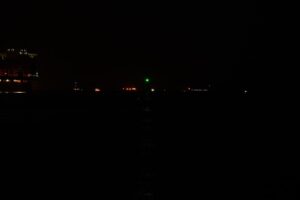 5:07am.  The moon had appeared and was at the top of the lighthouse.  I had increased ISO to 4000, which didn’t really do much at all.  After tweaking the RAW file, this is what I got.  Alignment was great, but focus was off and way too much grain. 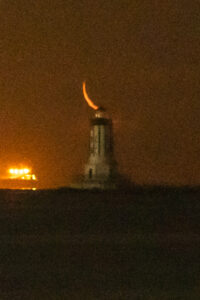 5:08am.  Just as the moon touched the top of the lighthouse, we were photobombed by a cargo ship.  Doh! 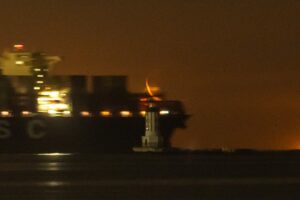 5:11am.  I finally pushed shutter speed to 6s, keeping aperture at f6.3 and ISO at 4000.  Here’s what I got.  The moon wasn’t blurred as much as I thought it would be, and I wasn’t happy with focus, but I don’t know how much better I could have done. 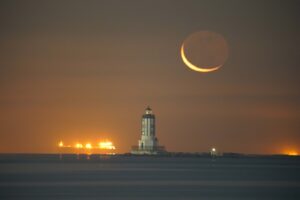 Better, but I still wouldn’t call it a good photo.

My settings for the next moon photography outing

Conclusions.  I haven’t found the right settings, but these are the things I would do next time.

– manual focus when beacon light is on, lock lens
– try very high ISO, say 8000-10000, 0-3 seconds, and see how much can be recovered in post (i.e., see how bad the grain is after denoise).
– a friend of mine, the very talented Matthew Partsch, aka @the_orangeskies on instagram, got an interesting shot with 15s, F8.0, ISO 2000, and I think this would be worth trying as well.  His lighthouse was also pretty sharp, but he was at 700mm, so I don’t know if that helped focus or not.  If you’re interested, here’s Matt’s shot of the crescent moonrise at Angel’s Gate Lighthouse, taken the same morning.